Not only is he an award-winning composer and multi-instrumentalist but Dave carries
well-vested knowledge in all the instruments of the steel orchestra as well as
the traditional music of sub-Saharan Africa, a pool of knowledge he shares with
his good friends Pops Mohamed and Andrew Tracey (son to Hugh Tracey). Dave and
Pops have done over 200 concerts together and many workshops and outreach
projects. in 2015, they performed at the Standard Bank Jazz Festival and
released the album “Live in Grahamstown” which was nominated for Best Jazz Album at the
SAMAs. Besides delving into the instruments’ roots, the duo often invites
guests adding unusual flavours, like Afrikaans hip-hop artist, Jitsvinger
(born Quintin Goliath) who blended his rhyme skills with the Khoisan spoken
texts from the presentation.

Dave Reynolds has toured and recorded all over the world with legends like Andy
Narell, Steve Newman, Hugh Masekela, the late Gito Baloi, Tony Cox, the late
Sipho Gumede, Paul Hanmer and McCoy Mrubata, to name just a few. 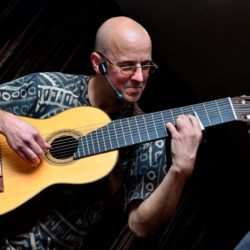