Michael Blake (b. 1951, Cape Town) is largely self-taught as a composer; his work is associated with conceptual art and the beginning of an experimental music
movement in South Africa in the 1970s. In 1976 he began a series of pieces
based on African composition techniques, continuing more recently to explore a postmodern aesthetic in a range of different styles.

After spending 20 years in London, he returned to South Africa in 1998, establishing the ISCM South African Section (NewMusicSA), New Music Indaba and Sterkfontein Composers
Meeting. From 2002-2009 he curated The Bow Project – string quartet
reimaginings of Nofinishi Dywili’s uhadi songs by South African composers –
culminating in a double CD on the TUTL label.

Blake’s music has been played all over the world, including recently at Festival d’Automne à Paris, Ars Musica Belgium and the ISCM World Music Days in Slovenia. His music is recorded on a dozen or so CDs, and a Wergo recording of his cello music with Friedrich Gauwerky and Daan Vandewalle was released in April 2018.

Having taught at Goldsmiths College London, Rhodes University and Unisa, he currently divides his time between his home, in France, and South Africa where he is Honorary Professor of Experimental Composition in the Africa Open Institute for Music, Research and Innovation at Stellenbosch University. 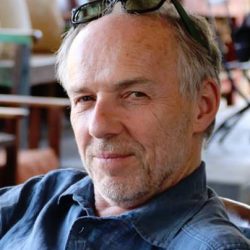