Commissioned by the South African Music Rights Organisation for the Deon van der Walt Masterclasses (1997)
The poems of SV Petersen are often about his position as an outsider, both within his own community and the largely white literary fraternity of the time. The six poems that make up the cycle show his inner struggle against – and, ultimately, his triumph over – this position, but are also applicable to the ostracized and oppressed of all times.
The first song, Kinders van Kain, starts with a short introduction depicting innocence, as symbolised by the image of dawn.
The second song, Die veles, is a sardonic account of the multitude’s ability to steer an uncritical middle course between innocence and corruption. It takes the form of a deliberately banal tango, intended as a symbol for the multitude and its doings, juxtaposed against the poet’s caustic commentary.
Weeklag van die gewonde deals with the poet’s reaction to the attempts to check him in the expression of his woes.
Kinderland, with its nostalgic evocation of a lost state of innocence, provides a momentary oasis of wistful calm in the midst of agitation and anguish. The re-awakening to the dreary present, described in the second part of the poem is underlined by a return to the minor.
The depths of despair, of despair so dark as to lead to bitter, reckless defiance, are plumbed in Die gier van die Bose. The laborious ascent from the depths of negation to a new sense of self-worth described in Ecce homo, is depicted by an upward-modulating ostinato. 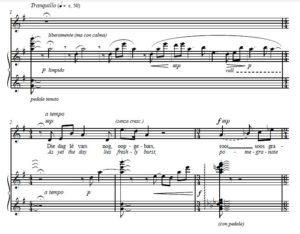