My Five African Sketches for guitar, commissioned by SAMRO in 1989 and completed the following year, reflect “a day in the life of Sowetos’ and trace a path from darkness to light, from despair to hope, from heaviness to light-heartedness using indigenous polyrhythms, ethnic melodies and colourful harmonies.
The first sketch, Before Dawn, is rather sombre in mood: it opens with a series of three ascending sevenths followed by three descending semitones, a figure outlining the tritone E-natural to B-flat, which depicts the darkness. This figure is inverted towards the end of the sketch, announcing the daybreak. Arising and falling minor third (an interval of atavistic vocal origin) is the focal melodic feature. Metric alternation of five and four yields a rhythmic irregularity that is typical of African music.
The second sketch, Awakening, is contrastingly diatonic, based on the Phrygian mode —a scale-form often used indigenously. Light quavers per bar are sub-divided in an ethnic arrangement of 3+2+3. This “awakening” is a process of growth, both melodically and texturally, and ends on a long-held B-flat, which is also the first note of the following Meditation.
Structurally, the framework of this third sketch—a short, highly-concentrated chordal study —is once more that of a triton (again B-flat to E-natural: the “daybreak” of the first sketch), which here expresses yearning for a return to spirituality and a departure thorn the alienation of township life in South Africa. Melodically and harmonically, perfect fourths .predominate, evoking a “pensive” quality implied by the title.
In the penulñmate sketch, Friendly Dance, the perfect fourth remains as an indigenous structural feature. Nine beats per bar are sub-divided into 5+4, giving a motoric drive to the music. Constantly shifting phases serve to highlight the mimetic aspect, while chordal textures eventually thin out to an insistent D-natural, the tonic pitch of the tonal episode in the final movement, township tonight.
In this concluding sketch, after a short introduction, a repetitive motif announced. Its rhythmic grouping 6/8, 3/4 is based on “Americas’ from Leonard Bernstein’s Pest Side Story, an allusion not without aptness. This leads naturally into a tonal episode in D major {scordatura) which is typical of the kwela, a generic dance-form in mbaqanga (‘township jazz”) associated, according to the New Grove Dictionary of Music, with “social emancipation and increased intensity of life”. Its free abandon is finally given shape again by a return of the opening material, bringing the suite’s diurnal cycle to an exuberant and exhausted close.
I offer this work to guitarists throughout the world as a tone-picture of South African life, painted in some of the cross-cultural/cross-genre colours of its unique musical palette. 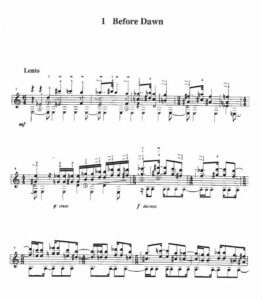