Visions for Solo Flute uses the pentatonic scale, rhythmic motifs as a means of sectionalizing each piece, drastic changes in rhythmic texture and louder dynamics to indicate moments of climax, and the Minimalist technique of slow changes in harmonic rhythm. Joshua Uzoigwe: Ilulu (Invocation), originally is the first movement of the Oja Flute Suite, a set of three pieces written reminiscent of the wooden endblown flute native to the Igbo people of Nigeria. Ilulu refers to the first part of the ukom ceremony called ilulu nkwa, described by Uzoigwe as the “solo musical lamentation and invocation of the dead, plus the retuning of the drum row.” Ilulu’s perpetual variation form, improvisatory sound, and speech-like nature “provide musicians with an adequate means of articulating the intense feelings and emotions certain social-musical events engender in the minds of people.” Fred Onovwerosuoke’s Six Variations on a Pende Folk Tune begins with a plaintive melody, but immediately graduate into a show piece of imageries, dances and intrigues about the wildlife communities around the Zambezi river in south central Africa. Some of the variations, particularly II, III and VI attempt to recapture some of the dance traditions among the Pende and Mlongo peoples from that region of Africa. 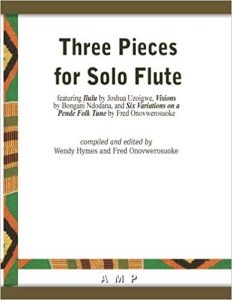