Gabisile Motuba, popularly known as Gabi Motuba, is a South African award winning jazz vocalist composer and arranger, born in Mamelodi. She studied jazz music at Tshwane University of Technology (TUT) and received her diploma in 2013. In 2019, Gabi Motuba returned to TUT to complete her B Tech in jazz music majoring in Jazz Improvisation.

In 2019, Gabi was featured as a singer/songwriter on the SAMA nominated jazz album Project Elo by renowned South African drummer, Tumi Mogorosi. The album was re-released under the London Based Record Label (Jazzman Records) in June 2014. The album received numerous accolades and was recognized by The Mail and Guardian as one of the best jazz albums of 2014. Project Elo was a spiritual jazz album which consisted of choral voices, a horn section as well as the thrilling and exciting jazz drums of Tumi Mogorosi.

In 2015, Gabi Motuba, recorded and released her debut duo jazz album, Sanctum Sanctorium while on a Prohelvetia Artist Residency Program in Switzerland. Sanctum Sanctorium also features world-renowned Swiss pianist, Malcolm Braff. The album is an exploration of the ideas round ‘the sanctum’/ safe spaces, which can be also understood as environments which are conducive to creation.

In 2017 Gabi recorded her debut solo album, Tefiti-Goddess of Creation. The album comprises of 10 original string compositions by Gabi Motuba. Within this album, Gabi was exploring the notions of form versus function within the jazz idiom. Gabi wanted to be in conversation with the fundamental principles of jazz which are: improvisation, communication, group thinking and collective understanding, and to also explore the kind of music/instrumentation, composition one had to engage with, when considering these principals.

Between 2017 and 2019, Gabi, was commissioned by SAMRO to compose and arrange several compositions i.e. Those without Time and The Chorus. The compositions are available on the SAMRO website. In 2019 Gabi Motuba also provided numerous workshops and developed music curriculums for young children from previously disadvantaged backgrounds, in collaboration with Soweto Theatre.

In 2019 Gabi Motuba, also in the formation of a band , recorded a conceptual/theoretical project which is an interpretation of a written text by Frantz Fanon (psychologist, revolutionary, intellectual) called The Wretched ( named after the book, The Wretched of the Earth) . The outfit consists of the following: vocalist and sound-scaper Gabi Motuba, Tumi Mogorosi on drums and sound artist Andre Van Wyk. This project explores the sound through the lens of a shriek, a scream, a moment at the end of the limit of struggle. Theoretically this aligns itself with a history of sonic writing that has been the means to deal with trauma or as refrains of such.

In 2020, Gabi began a new venture as a Sheet Music Editor, to assist local and international artists looking for assistance in editing their compositions, lead sheets and arrangements. Together with these services, Gabi also transcribes local jazz and indigenous music onto sheet music. Gabi’s clients include the following jazz musicians: Mthunzi Mvubu, Tumi Mogorosi to name a few. 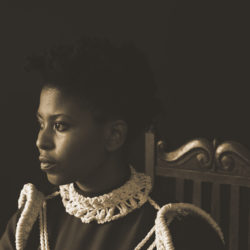 THOSE LOST IN TIME