Clare Loveday is a Johannesburg-based composer whose works have been performed on four continents. Striving to convey through music the complications of life in a post-colonial society, her works have been described by critics in turn as ‘obstinate and fierce, big-boned and raw’, ‘subtle’ and ‘elusive’. She has been described as having ‘a quite individual post-tonal harmonic language’ and of writing works that are ‘exciting to listen to and yet obviously also enjoyable to play’.

Clare completed a Bachelor of Music at the University of the Witwatersrand in 1990 and was awarded her Doctorate of Music in 2009. She is actively involved in the new music scene in South Africa and has served for many years on the executive committee of NewMusic South Africa. 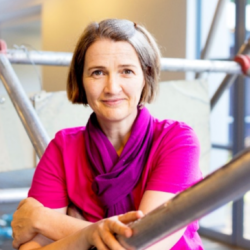 FLOATING UNDERWATER IN THE SHADE

FLOATING UNDERWATER IN THE SUN

FLOATING UNDERWATER IN A TWISTING RIVER